News Release: Joseph Abruzzo sworn in as Clerk of the Circuit Court and Comptroller 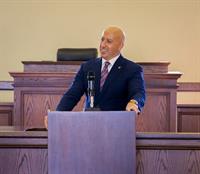 He also spoke directly to his team of nearly 700 employees, committing to a new course for the office – including the creation of an ombudsman position who will report directly to Clerk Abruzzo, and serve as a direct advocate for employees.

“To the employees who are watching: You are the foundation of this office. Everything that occurs positive, happens from you,” Clerk Abruzzo said. “I enter this office with you in mind. We are going to set a new philosophical course of our office, and how it’s done.”

He also announced that he has requested that the state’s Auditor General conduct a full review of the office’s practices and policies, to ensure they are in compliance with state law.

“This is not a mark on the great work that everyone has been doing. We are going to get a clean bill of health,” Clerk Abruzzo said. “… And if everything is not up to standards of what they need to comply with under the law, we will quickly and effectively change those.”

“This office will be completely free of political influence, based on political contributions,” Clerk Abruzzo said.

Clerk Abruzzo’s Oath of Office was broadcast virtually due to COVID-19, with a small group of Clerk’s office leaders, as well as close friends and family. Clerk Abruzzo’s son, Joseph II, held the Bible for his father while he was sworn in by Chief Judge Krista Marx.

The full video of Clerk Abruzzo’s Oath of Office ceremony can be found on the Clerk’s YouTube channel, www.youtube.com/clerkpbc.

State Attorney Dave Aronberg welcomed the socially distanced audience in attendance for the swearing in for his friend and former colleague in the Florida Legislature, sharing his thoughts on the critical role that the Clerk of the Circuit Court and Comptroller plays in Palm Beach County’s government.

“If you think about it, the Clerk’s office is the most important office in our county, that few people outside the courthouse know about,” Aronberg said. “They deal with all the paperwork, they deal with the financial oversight, they keep the court system running.”

Rabbi Amy Rader led the invocation at the ceremony, praising Clerk Abruzzo’s leadership and his service to the community.

“If anyone can protect our public records and our public funds with integrity and honesty and responsibility, Joe Abruzzo, you are the one to do that,” Rabbi Rader said.
Clerk Abruzzo also used his Oath of Office ceremony as an opportunity to introduce his leadership team, most of them promoted from within the office’s ranks. That team includes:

Type an Industry or Business Name